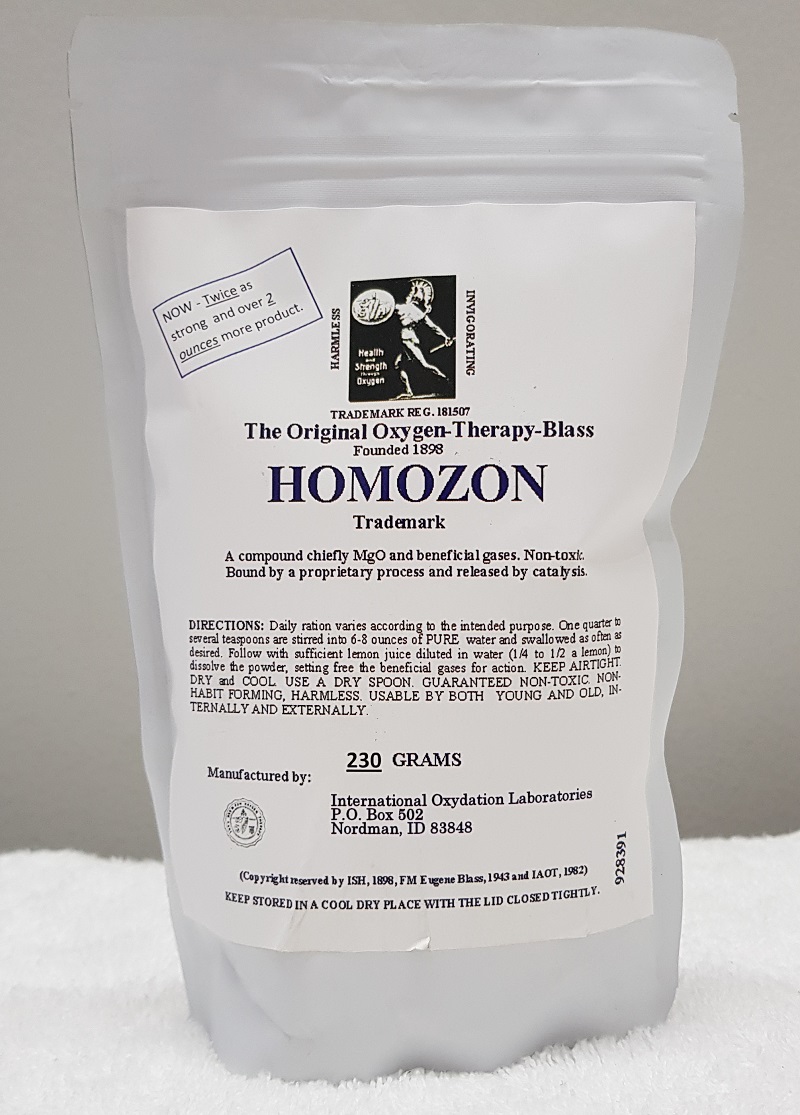 Homozon in the new mylar pouch

Homozon in the new mylar pouch

What is HOMOZON©?
Homozon© is a compound of magnesium and Oxygen in which the magnesium atoms form a loose lattice onto which large volumes of Oxygen is bonded by catalytic process.
When taken with lemon juice or some other mildly acidic juice, the Oxygen is then released inside the digestive tract, producing many well documented benefits.
The Oxygen content of one teaspoonful of Homozon© is about equal to two 16-ounce bottles of 3% hydrogen peroxide in terms of oxygen content, but without the hydrogen (which is acidic).
If you are new to oxygen therapies, let’s just say that that is a huge amount of oxygen!

As do most Oxygen therapies, Homozon© provides Oxygen to the body in the form of Nascent (born free, available, active) Oxygen or *O1* Singlet Oxygen, also called the Oxygen freeradical, which does not have to be converted by
the body into a form of atmospheric Oxygen *O2* we normally breathe.
Nascent Oxygen is Oxygen in its most chemically active, born free and available form, and is the only form of Oxygen the body uses.

Homozon© also has a wonderful laxative effect. The stool is always loose and bowel movement regular and, depending on the dosage, frequent.
Some people consider the bowel-loosening action a problem, but it is really one of its desired effects, facilitating elimination of toxicity through the bowel, yet Homozon© lacks the habit forming or bowel-weakening effects of some laxatives.
Taking Homozon© approaches colonic therapy in terms of efficacy in flushing the bowel and doesn’t require any mechanical apparatus or intervention.
It also plays a key role as an adjunctive support for anyone treating ANY kind of chronic disease due to the huge amount of oxygen that is released into the colon and then immediately absorbed into the blood stream.

Think of it as  “slow-release” form of oxygen that is active throughout the ENTIRE length of your digestive tract for over 12 hours.