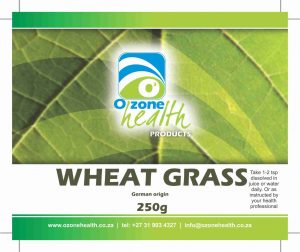 Some experts claim that wheatgrass contains over 100 different elements needed by man. One of the most noticeable (and important) nutrients in wheatgrass is chlorophyll.

Chlorophyll is the substance that gives wheatgrass its signature, bright green color. Like other nutrient-dense greens, it’s used in the human body for a number of important processes: It’s a natural liver cleanser and detoxifier, acts like an antioxidant to reduce free radical damage, is a blood strengthener (it has a similar chemical composition to that of hemoglobin,) and can help give you a boost in energy.

But chlorophyll is not all wheatgrass has to offer. Wheatgrass benefits also include being loaded with amino acids (the building blocks of proteins), enzymes which are needed for digestion, and many vitamins and minerals needed for disease-free living.

Wheatgrass is rich in the following nutrients:

Wheatgrass is a potent source of a number of vital nutrients your body can’t do without. Dozens of studies on wheatgrass — and also its individual antioxidants and nutrients — show that its health benefits include:

Here are the four most prominent wheatgrass benefits:

Wheatgrass provides vital alkalizing benefits for the body, along with increasing absorption of nutrients like electrolytes, vitamin C and vitamin E. If you want to prevent cancer and other chronic diseases from flourishing in your body as you get older, creating an alkaline environment is essential.

Acidosis (high levels of acid resulting from low alkalinity) is an all-too-common problem today, due to toxicity from the environment along with many people eating highly processed foods. Cancers and other diseases flourish in acidic environments, but cease to exist in alkaline ones.

What gives wheatgrass the ability to prevent acidosis? Chlorophyll is primarily responsible. Chlorophyll has been shown to help naturally balance the body’s pH level and protect cells. This is one of the reasons that chlorophyll consumption is associated with anti-aging effects ranging from younger-looking skin to better weight management.

Wheatgrass benefits including having strong antioxidant capabilities and can also lower oxidation/free radical damage that causes aging and contribute to disease formation. Studies have found that wheatgrass can significantly inhibit lipid peroxidation in the liver and protect mitochondria within cells. This is tied to reduced inflammation levels and lower risk for diseases like cancer, liver disease and heart disease.

Research regarding the antioxidant levels (ORAC values) of various “superfoods” has found that wheatgrass has an ORAC score “higher than those reported for many other natural extracts or vegetables”.  Work done by the Department of Pharmacology at Gajara Raja Medical College in India has shown that some of the antioxidants present in wheatgrass include:

Studies have found that wheatgrass demonstrates anti-cancer potential, and that it seems to do so through the mechanism of inducing apoptosis (self-destruction of cancerous cells). According to research done by the Integrated Oncology and Palliative Care Unit in Israel, wheatgrass can be effectively used in holistic cancer treatment programs (even those that also use conventional treatments like chemotherapy), and also for cancer prevention. (7) Its benefits for overall immune function include regulating immunological activity and fighting oxidative stress that contributes to cell mutations.

Research shows that wheatgrass can also help attenuate chemotherapy-related side effects such as fatigue, malabsorption and deficiencies. Other than helping to prevent and treat cancer, clinical trials show that wheatgrass may induce synergistic benefits to those with other immune-related conditions such as rheumatoid arthritis, ulcerative colitis, hematological diseases, diabetes and obesity.

Studies conducted at Sharma University of Health Sciences in India show that wheatgrass is a medicinal plant for the heart and blood vessels — it can be effective in treating hyperlipidemia (it helps lower high cholesterol and triglyceride levels along with increases in inflammation and oxidative stress).